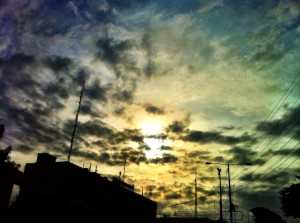 Its been really harsh waiting for rain in Karachi this year. This may have to do with the obvious concern brought by the last two years gigantic rainfall and the resulting floods which saw this city open its arms to those in strife around it in an effort the likes of which I at least have not or hope to see again. It may also have to do with the fact that Karachi’s weather has been playing the part of a temptress which seduces and then leaves hanging for the most part of this summer. People (well mostly me) have been jumping up and down when a single grey cloud appears on the horizon for the past several weeks to no avail.

Today however was different. With the soggy night of yesterday & its light rainfall promising much, today’s sunrise captured by me above was nothing short of a miracle in itself. The day was passed in stifling heat with the air surrounding one like thick soup. So much was the humidity that at around  5-6 pm I could hardly breathe not because of the air pressure only but as I had looked up to see dark slate colored clouds gathering above us all.  When it did happen, it was glorious for when it rains in Karachi it rains like it wont stop, it rains like there is no tomorrow in big fat cold gobs of nectar from the sky & so it rained!!

After the first 8 mins or so of this exquisite sensation have passed and one is brought back to reality usually with a horn blaring in your ear to move your goddamn car as quickly as you can the scene changes. Where there was expectation before there is now mild panic and fear of the unknown. Give it another 15 mins of hard pelting rain and the scene descends from panic to chaos on the roads. Ahhh yes we Karachiites do live in perpetual sensory anarchy on a daily basis but the usual manic tendencies take on a new monstrous face when it all gets wet.

My personal experience today went from instagramming clouds to screaming in disbelief as the suzuki pickup in front of me decided to inhale the soul of some souped up hummer and try to go over the pavement to get out of the traffic by going the wrong way (yes against incoming traffic) on the other side of the road. You would think that a car with a tire rod that looked like the thingamejigs of my four year olds lego connecting its wheels would not be able to make such an attempt but it did, oh yes it did! Moments later it stopped with a clunk amidst the horns of the hundreds behind it bleeping their disgust as it hung onto the pavement.. in the middle of it  & each end on either side..impaled on its own stupidity.

Next came the arduous task of moving past this pathetic obstruction without mowing down its occupants who chose to jump out shalwars pulled up into by now knee deep water screaming and cussing at the pavement as it was I suppose not going with their plan of bending as they tried to go over it like jello! So as I hocked my steering to port and tried to crawl around, the already ridiculous situation became even more dangerous with the snap of an over head electric wire which literally swung down sparks and all in an arc and missed the screaming driver and the water to my immediate right by maybe 4 inches.

Yes my vision slowed down, and yes my head swam but I gunned my engine and somehow crawled past right into the throng around me off course as there was literally nowhere to go in this insane traffic jam. No I did not look back at the said pickup and yes water makes a pleasant bubbly sound as it pours into you car from the side slits underneath the doors but funnily enough I just sat there, the water rising to almost ankle length inside my car waiting for the traffic to move.

It did eventually and I drove my sloshing ride at tortoise speed to arrive seemingly safe and sound at my home in about an hour and a half. The same distance I usually cover daily in about 10 mins at moderate pace I might add. As I opened the door and the water spilled out from the car onto the street I stopped and thought for a moment about the most dangerous part. Is Karachi more dangerous than other cities because it never gets a break from nature or criminals or is it the most dangerous because of the savages that inhabit it? Had that pickup not tried to make it into the record books we could have moved on and escaped looking into the jaws of a very crispy death right?

Wrong,  Karachi is the most dangerous megacity in this world because it faces all of this and more and still wants to go out and have a coffee the same night. If its people would cower in their homes if they would just light their damn candles and sit down inside when the power goes. Or if they would not try to go and catch first sight of the hurricane thats supposed to make landfall at the beach we call seaview. They would be a lot safer, a lot healthier and I dare say not Karachiites. Safe is boring, take your safe somewhere else! This city is scarred, its got soul its insane in patches and a heck of a lot of fun even with the near misses with grim reaper included. Karachi is like Smita patel in a wet white saree, its unforgettable  Thats what I tell myself to make me sleep at night at least or sometimes at dawn.