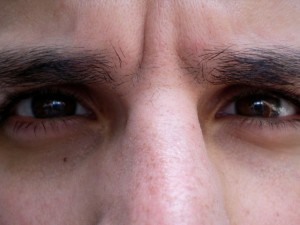 Pakistan has a bit of a problem, ok thatâ€™s the understatement of the year. Pakistan has a huge problem and it has nothing to do with guns or terrorists or politics or anything of that nature. No this problem is limited to our social behavior or perhaps we should call it lack of it, Â upon coming into contact with a woman.

One would think while walking through a Pakistani market, be it any market here that Pakistani men have been kept locked up in a padded cell somewhere where they have never come into contact with a member of the opposite gender. As they stare at them like a dog stares at a bone after being hungry for a couple of days.

Now correct me if I am wrong but there are plenty of women here in PakistanÂ andÂ plenty of very good looking ones, Â so its not like we are not used to them or have not been around them. Also with the advent of first theÂ satelliteÂ dish and then cable tv and now broadband we have had unfettered access to the woman of this world with and without clothes so whatâ€™s the big fuss about?

I could still comeÂ toÂ terms with it in the 80’s as the culturalÂ paradigmÂ was a bit lets just say starved forÂ entertainmentÂ at that time. However in the Pakistan of now where everyone gets their daily dose of skin from the top end to the bottom rung of our society why are we still so hung up on staring at women like we want to tear of their clothes and have them on the road then and there? Obviously I am being crude here but lets just face it looking at a woman like she is a piece of meatÂ isn’tÂ very sophisticated either.

Oh by the way before you trot out your lack of education and not used to exposure culture vulture theories let me Â cease them here and now by telling you that women wearing head to toe burqas face the same kind of treatment in Pakistan as their more sleeveless sisters. No one and no class is spared from this disease as you see the same expression on men’s faces in a hi fi mehndi or in the corporateÂ environmentÂ as you do when a woman walks by an under construction building. Whoops did I just do a sana safinaz there? No really you get stares even if you are a man walking past one of them construction sites but thats a whole different issue.

I believe the cause of this is is not the second coming of the dajjal or the Amreekan/Indian/Zionist cultural invasion but the fact that people seem to think staring “poondi” is a lesser Â form ofÂ harassment. This mindset is often reinforced by their peers with statements like “yaar dekh hi tu raha hun” but really we are taking the look and dont touch policy to another level already. Even women and many of them take this treatment without standing up for themselves. However we tend to subdue and turn our women into submissives from the get go with the constant dont create a fuss go home, dont start a tamasha brainwashing which by the time they turn 16 renders them utterly devoid of understanding when they are beingÂ harassed. Those that do get it are referred to by most of us as feminists which is actually pakistani slang for cat loving lesbians who have nothing better to do then dare to raise their heads to a male dominated vicious society. Down lesbo down!!!

So how can we stop this?

a) Start early and start at home, make your boys comfortable with female company, stop telling them things like oh this is not for you this is what girls do and crap like that so they stopÂ distinguishingÂ from an early age between the sexes

b) Stop telling your daughters that you should bear this in any way shape or form, inform them of personal space and what they are supposed to do with their knee when someone intrudes in it.

c) Talk to them when they are of an appropriate age of the birds and the bees, in these times it should be a lot earlier than you think it is so read up a bit on it, yes on the internet will do!

d) Try to get them to study in a co educationÂ environment. Many lessons can be learnt at school other than theÂ curriculum

e) Also teach them the much forgotten points of Islam, how women are respected in it to the level thatÂ heavenÂ is supposed to be under your mothers feet.Â ThisÂ may be reinforced if thought appropriate with examples from history when needed. Â Teach them about parda e nazar as well as draping them in black.

f) Try to keep an open mind when your kid asks you questions, usually they ask them because they want to know not because they are trying to ruin your super efficient day.

g) Try to put a stop to or raise voice against cases ofÂ harassmentÂ prevalentÂ around you in the workÂ environment and in public. Which means if someone is bumping against a person in a lift you are standing in put a fucking stop to it rather than look towards the door. If you ignore this you are part of this.

I also took the liberty of taking a little twitter survey on this of which the results are given below. In the hope that perhaps reading through these tweets rather than my post will help more people understand that women like to be listened to not stared at when in the company of a man.

Staring pandemic RTÂ @faisalkapadia: In your opinion do people in pk have a staring problem or is it the woman’s problem?

@faisalkapadiaÂ its only pakistani’s problem 🙂 whr ever they will go , thy will show pakistaniyat.

@faisalkapadiaÂ are u kidding me? Our problem? First of all u should look for a better term than ‘stare’ – more like ‘penetrate via eyes’ etc

@faisalkapadiaÂ People have a staring problem in Pk because of the sheer hypocritical morality that is socially enforced, thus repressive.

@faisalkapadiaÂ A bit of both. Varies according to the city/area you are in.

@faisalkapadiaÂ People in Pakistan have this problem.

Its def a Pakistani trait to stare RTÂ @faisalkapadiaÂ In your opinion do people in pk have a staring problem or is it the womans problem?

@faisalkapadiaÂ depends on who’s being stared at.

@faisalkapadiaÂ This will not end well.

@faisalkapadiaÂ People in Pakistan do have a staring problem.

@faisalkapadiaÂ Women in Pakistan have a major staring problem.

@faisalkapadiaÂ People in PK have a major staring problem! Even the ones in a burqa are stared at … How can it be a women’s prob then?

@faisalkapadiaÂ As for staring, overseas Pakistanis do it as well. Even those who are 2nd and 3rd generation. But only at other desis.

@faisalkapadiaÂ The staring is one thing, but what I find more bothersome is how they slowly scratch their groins whilst doing it. Eww!

@faisalkapadiaÂ its a common problem here.Every single person stares like there z no tomorow.Girls boys everyone has got this horrible habit

@faisalkapadiaÂ gold standard test for all desis.Stand in an elevator with a person next to u.If he scans head to toe till .. 1/2