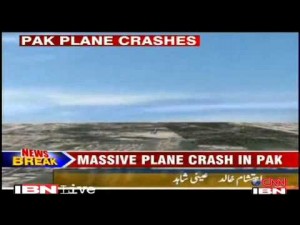 I dont know how many write ups am I going to start with the words, its been a week from hell. Seems like lately every week is a week from hell here in Pakistan and all we can do as people who actually live here is to hold on to any sort of hope, however false it may be to get by.

In the last few days 80 feet of ice came crashing down on Pak soldiers in the Gayari district of Siachen. Rescue efforts are still underway to no avail as people start to give up hope for the 135 sons, husbands and friends buried there. All for a war which has no meaning, apparently as much strategic importance as a comb to a bald man and must come to an end sooner rather than later, before more brave men are sacrificed to it on either side.

Today has brought the terrible tragedy of a bhoja air flight from Karachi to Islamabad which virtually disintegrated in mid air in a landing pattern before Isloo. Rescue workers are still picking up body parts and our main stream media is exhibiting as it does with every such atrocity new lows in journalistic ethics. Thrusting mikes in the faces of sobbing family members left behind, showing pictures of dead body parts and so on.

In the midst of all this a friend receives the following SMS which she emails to me in outrage. It reads

The instant incident of live
burrial of >135 troops of
Pak Army at Siachin is neither due to an Avalaunch
nor a Cloud burst but a Satellite targeted Laser impulse by NASA which resulted into this Objective
Oriented Killing Of Pak troops after Salalah .
Plz forward for National
Awakening Campaign . SHAME TO USA AND OUR LEADERS
From:column of Dr Ajmal Niyazi Nawa e Waqt Lhr.11.04.2012

Upon reading this two things come to mind. Firstly the sender isn’t exactly very well versed in the language they are trying to communicate in with the creative spellings galore in their text. Which begs to point to the fact that this is probably another brainwashed citizen trying to become the breaking sms version of one of our main stream media houses by spicing up a few details.

Secondly the sms and its intentions points to perhaps what is one of our deepest lying faults “the instant ability to put the blame on someone else” How hilarious is it that in the upcoming budget we as a nation will need donations from the very west we are so apt at blaming for all our difficulties just to fulfill out basic requirements. Alms for Pakistan  please? Because we really believe that even natural disasters like the floods and landslides are a result of mysterious american super weapons. Everything is your fault we are just victims of circumstance! That will be 35 million dollars sahab, we take cash only!

Another part of this amazing conspiracy based blame them mentality is the acceptability of all things arab as the shining beacon of our ummah. This is the part that is usually used to soothe over any fears of the future. Brother muslims who will be there to help us should we be going down. Brother muslims who must be given precedence in all matters from hunting licenses to serving as guaranteers for our umpteen political deals because they are so very kool. Their advice must be sought in all matters, but hold on they wont let us invest in their countries without kafeels or marry into their society or holds jobs with any kind of security or rights. Where oh where is all this permitted to us lowly dregs of this world? “Gasp” You dont say! Not in the west! OMG they are just doing this to destroy our culture further dont you know!!

Off course in all this self serving finger pointing lifestyle the conscience of our society or its ability to self examine has been all but lost. When it comes to a point where natural disasters are being attributed to fantastical imperial weapons can we as a nation ever heal that which ails us? Why can’t we stop blaming or idolizing all other societies and do both of these things to our own selves. Idolize the good in pakistan, blame what is bad in Pakistan and fix it. Do something else rather than just sit and talk expertise on every subject via texts or videos or twitter or whatever.

Do something before it is too late.