Everything has a life and in the tech world, the life of a killer app or a killer phone is about as short as an average consumers attention span. That being said the apple Iphone has and still manages to capture the attention of cellphone users and buyers worldwide, mainly due to the fact that it has redefined what is required from a smart phone from a customers viewpoint.

Case in point, I was a fan of blackberry for the longest time, which in Fk time means about a year or so, going from the earlier curve to the javelin which I thought was the be all and end all of smartphones!! It pretty much did live up to that claim, but sooner rather than later it started taking over my life, around 320 emails a day on average from people who just wanted an opinion on their current topic of choice or being cced in utterly random conversation threads ensured that I started hating its functionality and speed. In short it became a nightmare that would not stop beeping, plus it had no fun aspect in it, the screen is small the games are short and the app store is a bust. However I did not realize any of this till I actually played with an Iphone and until you do that all is well in your world.

Picking up that shiny silver brick and starting to flick through its paces will ensure that you get hooked under 5 minutes. Perhaps this is because the user interface is equally simple for a kid and an elderly (tech challenged) person. Let me give you an example, I gave it to my 1.8 year old son..in about 3 minutes he located the pictures folder and starting cooing in delight as he moved pictures with his fingers, that is how intuitive an Iphone is.

Now however after the launch of the much touted Iphone 3GS turning out to be just a souped up version (processor and camera wise) of the 3G with equally horrible battery time, a challenger has emerged.

The new Motorola droid is the “it” device right now and it has been launched with a in your face campaign to give apple developers more than a headache. A 30-second television spot, first aired Saturday, starts by listing features lacking on the iPhone. “iDon’t have a real keyboard, iDon’t run simultaneous apps, iDon’t take 5-megapixel pictures,” the ad begins, looking much like Apple’s own advertising and delivers a kick in the face of the insanely popular silver brick.

So there you go, its faster with a texas instruments 600 mhz monster under its hood, its touch with tap controls and swipe able just like the Iphone (although no pinching) and it runs on the google android 2.0 software, brand new and very very efficient in multitasking as well as features. It has a much much better camera and current tests have revealed a battery time far greater than a 3gs (about 10 hrs compared to 6 on the 3g). Lets not forget the full qwerty keyboard along with it, which is also thin enough to ensure that the overall phone is not fat and unwieldy like those nokia bricks.  It also has enough widgets and do nuts in the os to keep any geek as well as average consumer interested, not bothering with those details but sufficient to say it runs pretty much all basic services an Iphone can, for eg twitter, fbook and messengers. 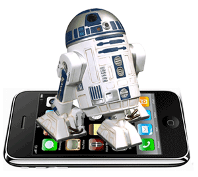 So do we deem the Iphone as passe? Well here is the creepy part, even in the recent past Iphones have been supposedly trumped by devices which can beat them on paper ala specs but when launched, fall flat on the consumer hearth throb barometer. Its not just the hardware that is the key with a supreme customer experience but the hardware/os/appstore troika that manages to emerge victorious every single time. Even last weekends sales in the U.S indicate that although critics have penned the droid as the hottest phone today, customers are still buying Iphones on a 10 : 2 ratio of competition to it.

So I think until the droid comes up with the  customer mmmm taste to match the ingredients in which it currently reigns supreme we should hold off on crowning the new king just yet. As it is who the hell takes pictures in the dark, even with a 5.0 megapixel camera…really Moto lol