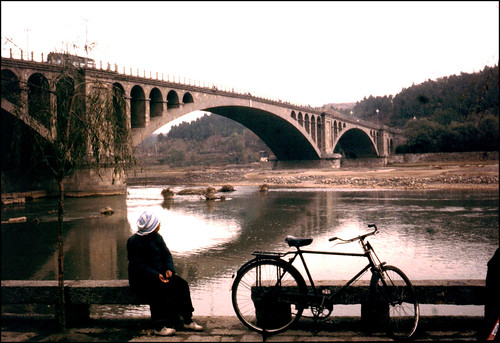 The city of Zhengzhou in Henan province which I got off in after the last entry is massive and a bit archaic as Henan is the poor part of china or the part most foreign tourists or business travelers do not get to see.

The population of henan is about the population of our country, and the effects of poverty here are heart wrenching, although beautiful the countryside had people cycling along without shoes and in tattered clothes. I reached Hua xian where the factory I wanted to visit was situated after a drive of two hours through lush green forests dotted with wood temples.

It felt like I had been thrust via bullet train from the gleaming modernity of a superpower into the ancient surroundings of a medieval china, still coming to terms with its power and racked by bad economic conditions.

I would think the best likeness of  Hua Xian in Pakistan would be the small hill station of nathia gali in our north, the greenery and air is similar, cold and refreshing although the mountains are far off in the distance.

The people of Henan and specifically Hua Xian are friendly simple and honest folk, milk and bread is delivered early in the day on cycles and although the town is small the amenities are all present, from internet service to fax and fast food outlets. Happily the taxis start their meters @ RMB 3 here instead of the 10 in Shanghai.

A days stay here and after my work was done I was more than ready to head back to the blurring pace of  Shanghai, preferably by flight this time as I had no stomach for the length of the train journey even at high speed. Buying a ticket in this small town was a comedy in itself as the travel agent sat under a tree with a wooden desk a laptop computer and a printer, booking and printing out tickets by wifi. A perfect blend of the new and old china.