Its been a week since I arrived in China and after the last post, as I flew back to Shanghai I felt like I was almost part of the fabric of this nation now, ceaseless noisy and restless. The flight back to the center of china was uneventful but the view in the morning of my last day from my latest acquisition in hotel rooming via ctrip was astounding. It showed the Huangpu river in all its glory and I was going to spend this day checking out the sights on and around it. 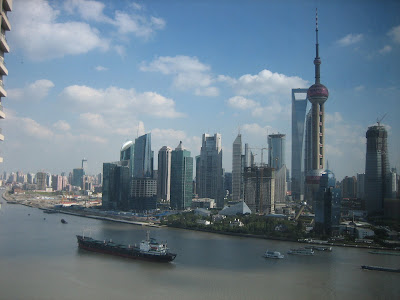 Obviously since this was the last day and I had spent the previous night on nanjing (shanghai)shopping thus I was a bit tired. Now I had tried on my previous encounter with the main streets of Shanghai to get this task finished but alas.. everything was designer and very very pricey, plus who goes to buy original louis vitton in china anyways, no sir I was looking for knockoffs and that too of a discerning quality and Najings the place for all that and more.

Shopping for knockoffs in Shanghai is an art I learnt slowly through my local guide, thank god for him as stepping out on this road draws a crowd of touts surrounding you with shouts of “Rolex” “Rolex” “designer, I make cheap for you” “Come with me man what do you want boy/ girl what do you want” Its quite overwhelming but through my friend I explained what I wanted and so totally ignoring the main street malls which were aplenty(pic above) we set off into the dark backstreets where the night markets are and in them some incredible bargains.

Skirting the back alleys of this city is no mean feat as we dodged through several old and breaking buildings and past many a darkened corner full of flesh trading into what I would describe as the knock off mall of the world, situated in the basement of an under construction building and full of every brand and every level of copy of it, from those you cannot tell apart from the originals to cheap imitations. The best store in the lot was of a guy named Abdullah Zhang, his adopted Muslim name since he heard Muslims can have four wives and some khepia made his recite the first kalimah to fulfill his wish.

Loaded up with the requisite amount of goods, I dropped the load off at my hotel and slept exhausted catching another taxi in the morning on my last day to the “Temple district” of Shanghai. The temple district is renowned the world over for its pre ming era wood buildings and temples made from precious stones and lots and lots of history. There are medicine markets and jewelry stores, temples and Chinese sea food stalls. Its all a big magnificent hotchpotch of light, color and some of the most awe inspiring buildings I have seen including the much touted historical values of venice and florence in europe. The air smells old here, musty and oriental and the aura is one of intimidation as visitors and onlookers gasp at every singular structure.

After lighting several joss sticks in various bazaar temples for good luck as insisted by the priests (religion being simple here, the more the joss sticks lighted at the altar the more the luck) I walked past the river bank close by to the evening ferry on the huangpu river. time passes quickly when one is having fun..

The Huang Pu is the biggest river flowing through the center of Shanghai and is flanked on both sides with huge buildings and banks as well as the tallest radio tower here which surprisingly looks a lot like the sky needle in canada. The ferry is an hours trip of marveling @ the water and the lighted skyline accompanied by as usual a Chinese floating restaurant onboard where one can have dinner and feast on seafood to their hearts content.

It was around 11 pm that I trooped home(after standing in a mile long taxi line of gagging tourists) rebuffing the usual offers of “massage please” near my hotel to finish the packing or the flight back home the next morning, tired and spent from both the beauty and the history of this place.

The flight home was a disaster, with the plane being stuck for a 6 hour delay in Shanghai on the runway and me reaching Bangkok in the wee hours of the morning to catch the nearest hotel bed, zonk out and wake up again to rush to the airport for the hop over to Karachi.

So that in so many words and three posts was the long and short of my chinese trip, for anyone visiting I must stress on the strengths of puncuality and politeness, the chinese value nothing more than a good person at heart. A fist ful of dollars does not always get you everywhere in this world.